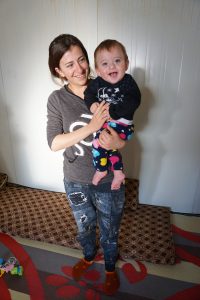 Dler is the second son born to young Yazidi parents in April of 2017 in an IDP Camp. He was growing nicely even in the difficult living conditions of the camp. His parents and grandparents were taking good care of him and providing him with everything he needed.

When he was only a few months old, Dler’s parents recognized that there was something wrong with their child. He was not reacting to their voices, nor to any other sounds. His father took him to an ENT doctor for an investigation and later he was diagnosed with a severe hearing loss. The specialist suggested for the boy to use a hearing aid.
Dler’s father was not working regularly and the family could barely get by with their low income. However, they understood that without the hearing aid, their son couldn’t learn how to speak and would be disabled. Thanks to the Frenchfoundation L’Association pour l’Aide aux Jeunes Infirmes et aux Personnes handicapées, Dler received the hearing aid and now he can recognize the voice of his parents and learn his first words.