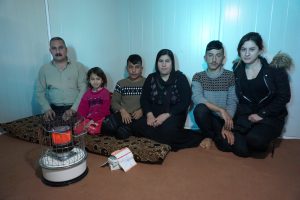 Vian is 8 years old and she is the youngest member of her family. She has five siblings and one of them is married.

She is from Rambusi a small viilage in Sinjar mountain. As many other IDPs from there she escaped to the mountains, walked to the Syrian border in the burning August of 2014, and lived in a unfinished building until 2015. In December 2015 she moved with her family to the IDPs camp of Dawoodia.

Vian suffers from Thalassemia Major and she has to take chronic medications as well as blood transfusions every 20-30 days. Her dad was previously employed, and therefore the family managed to have some money saved, unlike the majority of the families in the camp. Yet, their home in Rambusi was bombed down and in their current state no job is available anywhere so the family has no sufficient regular income. We decided to provide the family with the medication necessary as government hospitals seem not to have this medicine available.

Vian has just finished her second year of primary school. None of her siblings received any schooling and now they passed they age for which school is currently available. But she likes to go to school and she says she wants to be a doctor when she grows up. With your help we could manage to give her the future that she deserves.