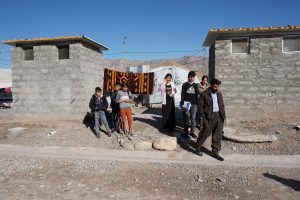 They come a village near Sinjar City and were displaced in 2014 by the advancement of ISIS and now live in an IDP camp in Northern Iraqi Kurdsitan. The latter hosts around 30,000 individuals and everyone shares a very small portion of space. Tents are amassed together leaving very little privacy for its inhabitants. Mahdi and  Mahwar live with other 10 poeple in 2 very small adjacent tents.There are no jobs available to those in the camp and the family only survives of IDP governamental support (18 $ per person per month) and some food vouchers they receive from another NGO.

Accordingly, new worries and needs have to be prioritised and Mahdi and Mahwar’s health necessities risk being overshadowed. Both kids have a severe hearing impairment, but only recently Mahwar, the boy, was given a hearing aid. Mahwar seemed to refuse to wear it and the family gave up on trying to address the problem and decided to focus on more pressing issues. However, Mahwar finally confessed that he was being bullied at school because of his cumbersome hearing support. In addition, Mahdi was left in need of a surgery and according to a recent specialist report of a further hearing device.

We decided not to give up on Mahdi and  Mahwar. Thanks to the support of the French foundation L’Association pour l’Aide aux Jeunes Infirmes et aux Personnes handicapées we finally managed to buy two functional and comfortable hearing aids for them to help them grow confident and aware of what is happening around them. Now they can start going to school again, learn and become strong young adults.